I first met Kathryn when she was in elementary school. She became a constant fixture in our Texas congregation, appearing whenever the door was open. Over several years, we became good friends. After her high school graduation, Kathryn went to college on the east coast and her parents moved to Orlando, Florida. But, we still kept in touch.

When Kathryn fell in love with James, she was eager for us to meet. James was and is a wonderful young man, a great match for Kathryn’s kind heart and fervent faith. Kathryn invited me to officiate for her wedding. I was honored with the request. The ceremony would not be in Texas because her family no longer lived in the Lone Star State, and Kathryn had few relationships in Florida; therefore, we would celebrate her marriage in James’ hometown, Annapolis, Maryland.

Months passed quickly. While Kathryn’s life had one major focus: her wedding, my life filled up with many other things. Both of us were truly blessed and busy. Kathryn called me on the Monday evening prior to her wedding. I was at a baseball game, sitting behind home plate watching my son as the catcher. I answered my cell, trying to hear Kathryn above the crowd. I attempted to focus on her voice; however, I was preoccupied with my son’s stance as he crouched behind home plate. Was he aware of the other runners? Was he prepared for a throw to second? Was he going to keep the next wild pitch from getting away?

Kathryn sensed my distraction. She called wanting confirmation of my wedding preparation. She wanted a taste of my sermon as she anticipated the biggest weekend of her life. To say the least, I did not meet her expectations. I even had the nerve to question whether or not I still had the chosen scripture in hand. When we ended the conversation I quickly absorbed myself back into the game.

The next morning, I received a call from Kathryn’s mom in Orlando. As gently as she could, her mother let me know of her daughter’s disappointment in me. Humility was not my first response. Kathryn was questioning the priority her wedding had in my life. I felt harshly judged that a conversation during a ballgame was being used to interpret my priorities.

However, my confidence did not wane. I thought to myself, “It’s me! I’ll bring it! I’ll think of something so cool that no one will doubt the priority I placed on this sacred event.” I set a blank pad of paper on my desk and wrote “Kathryn’s Wedding” at the top. Every day I stared at the blank pad. I prayed for inspiration, but everything that entered my mind reeked of cliché. Everything seemed trite and overdone and I needed something profound to prove my diligent preparation. I wondered, “Are there no new dynamic things to say about love and the covenant of marriage?”

Each day of the week passed into the next without inspiration. I wasn’t worried. There was plenty of time to organize my thoughts. When Friday rolled around, I announced to my wife, Lynda, that I would not be able to talk during the flight from Texas to Maryland: I had a sermon to write. I had something to prove. I prayed.

The empty pad sat before me on the seat back tray. Nothing. Out of desperation I asked the passengers around me for marriage advice. Seemingly, they weren’t offended that I asked! I explained my situation and they offered useless humor: “What she doesn’t know won’t hurt her.” “Take care of his stomach and he’ll stay at home.” It was fun, but super non-productive.

By the time the plane landed I was nurturing paranoia. I greeted Kathryn’s father and wondered if his eyes were questioning the value of bringing me to Annapolis. I greeted James and his family at the rehearsal dinner and internally wondered if they had discussed my unfortunate Monday evening phone conversation with the bride. I no longer needed Kathryn to question me. I was doing plenty of that on my own.

But, I wasn’t afraid. I still had all night, and the next morning, to pull stuff together. God would provide.

The rehearsal dinner was high class. We enjoyed fine dining at the Yacht Club on the Bay. I ate things out of the ocean I had never seen before. But something in a shell and I did not get along. I returned to the hotel as sick as a dog, up all night, hot then cold and becoming increasingly frustrated and angry.

The next morning I skipped breakfast and lunch in the hotel lobby with Kathryn’s family. My insecurity imagined their judgment with my absence. Lynda, not wanting to go alone, found something to eat in the hallway vending machine. The afternoon rolled around and I showered and cleaned-up but remained exhausted. Inspiration still eluded me and I felt abandoned by God. We went to the wedding. Everyone was so blasted happy. Grinning was everywhere and it merely reminded me of what I was not prepared to do. I looked to my wife, apologized and abandoned her for privacy anywhere I could find it.

I located the second grade Sunday school room in the basement. I sat in a little chair with my knees above my waist and poured out my heart in prayer.

Winging it is fine when it’s off the cuff. But after you have been dipping into the same well for 5 days and coming up dry it’s a bit crazy to dip one more time. Maybe I would simply ignore the spot in the bulletin where it mentions “sermon” and act like I forgot. Maybe I’d smile and quote something already said by somebody cooler than me. Maybe I’d slam my hand in the door just hard enough to look terrible, without permanent damage, and go to the hospital.

I went upstairs, stood in line with James and the guys and had no idea what would happen. One more time, I placed my life in God’s hands.

The ceremony passed quickly right up to the sermon and then time stood still. As I glanced through the congregation, my eyes caught my wife. She smiled. I couldn’t decide if her smiling eyes were a reflection of support and encouragement, or laughter at my predicament.

“What does my wife see in me? I’m just not that cool. I’ve obviously let everyone down.” God showed up in the midst of my sigh, in the middle of my insecurity about being loveable.

I looked into Kathryn’s eyes and asked, “So Kat, why did you fall in love with James? Really, what is so cool about James that you fell in love with him and not any of the other awesome guys in this room?” Kathryn leaded forward. Her eyes questioned if I wanted her to actually respond.

“I mean, Kathryn, what amazing cool things can James do that no one else can do? What’s so cool about James?”

The reason you fell in love with James is because James has the unique ability to make you feel like the center of the planet. What a wonderful gift! James has helped to shape how you see yourself.”

“Why does love like this get lost? How long does it take? A year? A decade? And a spouse realizes that they feel completely. . .

Sometimes, in relationships, we merely feel like the role we play:

I looked to James and questioned,

“So, why did you fall in love with Kathryn?” Everyone in the room, including me, anticipated what was coming.

“There is something about Kat that makes you feel.  .

There is something about Kathryn that makes you feel special, unique and significant.”

“James, know this. This is too important to ever forget. From this day forward, your wife is evaluating your marriage based on how you make her feel about herself. This is your greatest gift to her today. This is how you express your love for her. And the most important gift you continue to give throughout your lives together.”

You, too, have been blessed by God with significant and valuable relationships, some by blood and some by choice. You have been given human gifts to cherish, love and respect.

For this moment, choose a family member in your life that matters a great deal. For purposes of this discussion, for real, pick an important person in your family and write their name. (journal)

Have you ever wondered what words this person would choose to describe the way you make them feel about themselves? Do you think this person that you picked above, feels as important as they actually are in your heart? Be honest with yourself. I’ll restate another way. Imagine what three words they would choose to define how you make them feel about themselves, positive or negative, and write those words. (journal)

Now, how can you be sure they feel that way? You can simply walk up to your loved one and tell them how valuable they are in your life, and you should. But what actions would you choose to be sure they felt valuable in addition to hearing they are valuable? How does that happen? How is it going to happen? What difference would it make in their life if you spent significant time and energy making sure they knew deep in their soul how important they are to you? What difference would it make in your life knowing how hard you worked at lifting up your loved ones?

This is too important to ever forget: love is both a gift to receive and a responsibility to offer. You were born to experience love and to offer love to a broken world.

Love often sacrifices. It can be creative. It does not need to be requested. Look around your life today. Pick out an innocent victim of your love in action. Go crazy over-the-top enthusiastic in your love. Today, more than any other day, choose love as your demeanor. Share love, repeatedly and enthusiastically. May this string elicit a breath prayer every time you see it. May your prayer remind you that love is a Fruit of the Holy Spirit. It is yours to seek, experience, and share.

Be challenged. And then be ready to be blessed by love.

Tie a string around your first finger and may it remind you of the power of love in action. 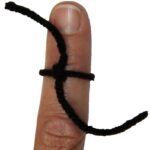